The Machinery of Detention and Deportation

WASHINGTON, DC (PR) -  The new report released is a sequel to a 2007 report and confirms that anecdotes are simply no substitute for hard data. For years, the quantitative data has established two key facts with respect to the relationship between immigrants and crime: immigration is associated with lower crime rates and immigrants are less likely than the native-born to be serious criminals.


The American Immigration Council released the report, The Criminalization of Immigration in the United States by Walter A. Ewing, Ph.D., Daniel E. Martínez, Ph.D., and Rubén G. Rumbaut, Ph.D.

The new report also describes the ways in which U.S. immigration laws and policies are driven by misconceptions and have re-defined the notion of “criminal” as it applies to immigrants. As a result, our immigration enforcement programs are designed to round up even long term residents whose only infraction is being undocumented.

Between 1990 and 2013, the foreign-born share of the U.S. population grew from 7.9 percent to 13.1 percent and the number of unauthorized immigrants more than tripled from 3.5 million to 11.2 million.

According to an original analysis of data from the 2010 American Community Survey (ACS) conducted by the authors of this report, roughly 1.6 percent of immigrant males age 18-39 are incarcerated, compared to 3.3 percent of the native-born. This disparity in incarceration rates has existed for decades, as evidenced by data from the 1980, 1990, and 2000 decennial censuses. In each of those years, the incarceration rates of the native-born were anywhere from two to five times higher than that of immigrants. 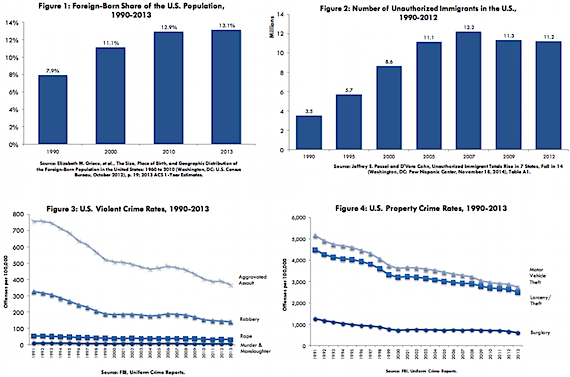 Criminalizing Immigration and Expanding the Apparatus of Enforcement

Despite the abundance of evidence that immigration is not linked to higher crime rates, and that immigrants are less likely to be criminals than the native-born, many U.S. policymakers succumb to their fears and prejudices about what they imagine immigrants to be. As a result, far too many immigration policies are drafted on the basis of stereotypes rather than substance. These laws are criminalizing an ever broadening swath of the immigrant population by applying a double standard when it comes to the consequences for criminal behavior.

Immigrants who experience even the slightest brush with the criminal justice system, such as being convicted of a misdemeanor, can find themselves subject to detention for an undetermined period, after which they are expelled from the country and barred from returning. In other words, for years the government has been redefining what it means to be a “criminal alien,” using increasingly stringent definitions and standards of “criminality” that do not apply to U.S. citizens.

Of course, these increasingly punitive laws are only as effective as the immigration-enforcement apparatus designed to support them. And this apparatus has expanded dramatically over the past three decades. More and more immigrants have been ensnared by enforcement mechanisms new and old, from worksite raids to Secure Communities. Detained immigrants are then housed in a growing nationwide network of private, for-profit prisons before they are deported from the United States.

In short, as U.S. immigration laws create more and more “criminal aliens,” the machinery of detention and deportation grows larger as well, casting a widening dragnet over the nation’s foreign-born population in search of anyone who might be deportable. With the technologically sophisticated enforcement systems in place today, being stopped by a police officer for driving a car with a broken tail light can culminate in a one-way trip out of the country if the driver long ago pled guilty to a misdemeanor that has since been defined as a deportable offense. 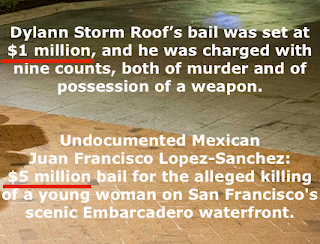 The scale of the federal government’s drive to criminalize immigration and expand the reach of the enforcement dragnet becomes very apparent when the proliferation of immigration laws, policies, and enforcement mechanisms is tracked over the past three decades. Two bills passed by Congress in 1996 stand as the most flagrant modern examples of laws which create a system of justice for non-U.S. citizens that is distinct from the system which applies to citizens.

And, from old-fashioned worksite raids to the modern databases which are the heart of initiatives such as Secure Communities and the Criminal Alien Program (CAP), the government’s immigration-enforcement mechanisms continue to expand and reach deeper and deeper into the immigrant community. In the process, basic principles of fairness and equal treatment under the law are frequently left by the wayside.

The United States is in the midst of a “great expulsion” of immigrants, both lawfully present and unauthorized, who tend to be non-violent and non-threatening and who often have deep roots in this country. This relentless campaign of deportation is frequently justified as a war against “illegality”—which is to say, against unauthorized immigrants. But that justification does not come close to explaining the banishment from the United States of lawful permanent residents who committed traffic offenses and who have U.S.-based families.

Nor does it explain the lack of due-process rights accorded to so many of the immigrants ensnared in deportation proceedings. Likewise, the wave of deportations we are currently witnessing is often portrayed as a crime-fighting tool. But, as the findings of this report make clear, the majority of deportations carried out in the United States each year do not actually target “criminals” in any meaningful sense of the word.

In November 2013, NPR reported that U.S. Immigration and Customs Enforcement (ICE) had been instructed by Congress since 2009 to fill 34,000 beds in detention facilities across the country with immigrant detainees every day. It was immediately apparent that this sort of inmate quota would never fly if applied to native-born prisoners. As the NPR story puts it: “Imagine your city council telling the police department how many people it had to keep in jail each night.” Clearly, such a concept has nothing to do with fighting crime or protecting the public. But when it comes to the detention (and deportation) of immigrants, very different standards of justice and reason are at work.

For more than a century, innumerable studies have confirmed two simple yet powerful truths about the relationship between immigration and crime: immigrants are less likely to commit serious crimes or be behind bars than the native-born, and high rates of immigration are associated with lower rates of violent crime and property crime. This holds true for both legal immigrants and the unauthorized, regardless of their country of origin or level of education. In other words, the overwhelming majority of immigrants are not “criminals” by any commonly accepted definition of the term. For this reason, harsh immigration policies are not effective in fighting crime.

Unfortunately, immigration policy is frequently shaped more by fear and stereotype than by empirical evidence, which is partly why immigrants are often treated like dangerous criminals by the U.S. immigration system. More precisely, immigrants have the stigma of “criminality” ascribed to them by an ever-evolving assortment of laws and immigration-enforcement mechanisms. From the Immigration Reform and Control Act of 1986 (IRCA) to Operation Streamline (launched in 2005), immigrants are being defined more and more as threats.

Whole new classes of “felonies” have been created which apply only to immigrants, deportation has become a punishment for even minor offenses, and policies aimed at trying to end unauthorized immigration have been made more punitive rather than more rational and practical. Moreover, as a growing body of “crimmigration” law has reimagined noncitizens as criminals and security risks, immigration law enforcement has increasingly adopted the securitized approach of criminal law enforcement.

In short, immigrants themselves are being criminalized. As prominent immigration scholar Douglas Massey has written with regard to the plight of unauthorized immigrants in particular, “not since the days of slavery have so many residents of the United States lacked the most basic social, economic, and human rights.”

This report tackles the criminalization of immigration from two angles. First, it documents the fact that immigration is not associated with “crime” as it is commonly understood. For more than two decades, rates of violent crime and property crime have fallen in the United States as the immigrant population (including the unauthorized population) has grown. Moreover, immigrants are less likely than the native-born to be behind bars or to engage in typically “criminal behaviors.”

Second, the report describes the ways in which U.S. immigration laws and policies are re-defining the notion of “criminal” as it applies to immigrants, while also ramping up the enforcement programs designed to find anyone who might be deportable. More and more, a zero-tolerance policy has been applied by the federal government to immigrants who commit even the slightest offense or infraction.

“Crimes” which might result in a fine or a suspended sentence for natives end up getting immigrants detained and deported. This represents a double standard of justice for immigrants in which the scale of the punishment (detention and deportation) far outweighs the severity of the crime (traffic offenses, for example). Unfortunately, this double standard has been the guiding principle behind a litany of immigration-enforcement laws and programs, such as the Illegal Immigration Reform and Immigrant Responsibility Act of 1996 (IIRIRA), the 287(g) program, Secure Communities, and the “Consequence Delivery System” implemented by U.S. Customs and Border Protection (CBP) in 2011.

The "Case" Against Undocumented People

No Red Carpet in Red Georgia 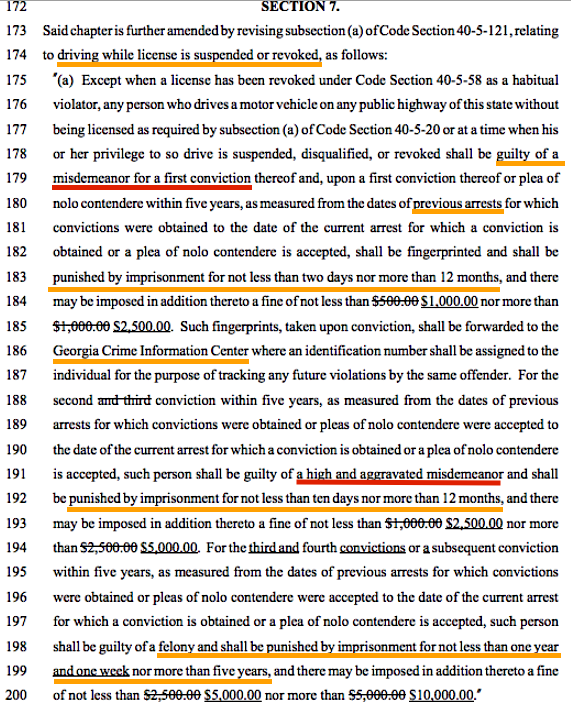 The bill sponsored by Republican Senator Josh McKoon, from Columbus, will be modified to add more restrictions for immigrants in the red state, according to his explanation in the Video below.

A chat with Editor Todd Rehm and Senator Josh McKoon
Posted by GaPundit on Wednesday, July 8, 2015