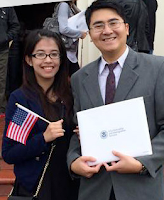 SEATTLE (PR) — Today, on its fourth anniversary, the New Americans Campaign launches a new site in Seattle. It joins the growing list of campaign sites across the country that promote naturalization for the 8.8 million lawful permanent residents in the U.S. who are eligible.

“OneAmerica is pleased to partner with ACRS in joining the New Americans Campaign,” says Rich Stolz, executive director of OneAmerica. “Naturalization strengthens our democracy and brings tangible benefits to individuals and their communities. This partnership builds on the innovative work of the Washington New Americans program, which organizes free citizenship clinics throughout the state and provides support to community-based organizations that reflect the full diversity of Washington’s immigrant communities.”

“Asian Americans and Pacific Islanders are the fastest-growing racial minority group, locally and nationally, fueled by both migration and immigration,” says Diane Narasaki, executive director of Asian Counseling and Referral Service. “Citizenship provides a path for people to participate fully in our community and is at the very heart of our nation’s values. ACRS, one of the largest naturalization services providers in Washington state, is pleased to partner with OneAmerica in support of all who seek our services.”

The Wallace H. Coulter Foundation has provided funding and a matching grant challenge for the new site. Additional funding for the New Americans Campaign comes from the Carnegie Corporation of New York, the John S. and James L. Knight Foundation, the Evelyn and Walter Haas, Jr. Fund, the Grove Foundation and the JPB Foundation.

“Civic engagement of Asian communities is very important to the nation, and naturalization is the first step in achieving it,” says Sue Van, chief executive officer and president of the Wallace H. Coulter Foundation. “We’re proud to be instrumental in bringing the New Americans Campaign to Seattle.”

About OneAmerica
OneAmerica’s mission is to advance the fundamental principles of democracy and justice through building power in immigrant communities in collaboration with key allies. Initially named Hate Free Zone, the organization was founded immediately after September 11, 2001, to address the backlash in a post 9/11 world against immigrant communities of color, primarily Muslims, Arab Americans, East Africans, and South Asians. Since then, OneAmerica has expanded into the largest immigrant advocacy organization in Washington state, organizing in and advocating for and with a diversity of immigrant communities including Latino, African, and Asian. OneAmerica also plays a leading role in national coalitions within the immigrant rights and due process arenas.

About Asian Counseling and Referral Service
Asian Counseling and Referral Service (ACRS) is a nationally recognized nonprofit organization working for social justice and offering a broad array of behavioral health programs, human services, and civic engagement activities for Asian Americans and Pacific Islanders and other underserved communities in King County and beyond. ACRS is the largest multiservice organization serving a wide range of Asian American and Pacific Islander communities —immigrants, refugees and American-born — in the Pacific Northwest.

About the Immigrant Legal Resource Center
The Immigrant Legal Resource Center (ILRC) works with immigrants, community organizations, legal professionals, law enforcement, and policy makers to build a democratic society that values diversity and the rights of all people. Through community education programs, legal training & technical assistance, and policy development & advocacy, the ILRC’s mission is to protect and defend the fundamental rights of immigrant families and communities. The ILRC is the lead agency for the New Americans Campaign.
—>
Posted by Unknown at 3:30 PM