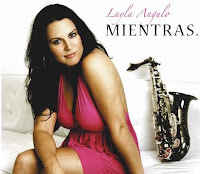 The concert begins at 7:30pm; tickets can be pre-ordered online at www.uuaugusta.org for pick up at the ‘will call’ desk on the evening: $18 Regular, $13 Senior, $8 Student/Military.

Tickets are also available at the door with payment by cash or credit card: $20 Regular, $15 Senior, $10 Student/Military. Refreshments will be available before the concert and during the intermission, we appreciate a donation (cash or card). You may pre-order via an online form here at this link: https://goo.gl/NFsRRP

Sax player and vocalist Layla Angulo brings a sizzling hot live salsa performance to Augusta. Layla is one of the only female saxophone players/singers/band directors in the world of Latin music today. As a Saxophonist, she spent a year on tour with Reggaeton Superstar, Don Omar, has toured with Tito Puente Jr., the Sugarhorns (Beyonce’s horn players) and played with many other grammy award winning artists.

Her first CD, Live at The Triple Door was a huge success, especially in South America where her song ‘Que Te Vaya Bien’ became an underground hit. The song, as well as her current compositions, reached Semi-Finalist position in the International Songwriting Competition, and have received other awards and high reviews.
Posted by Unknown at 8:57 AM